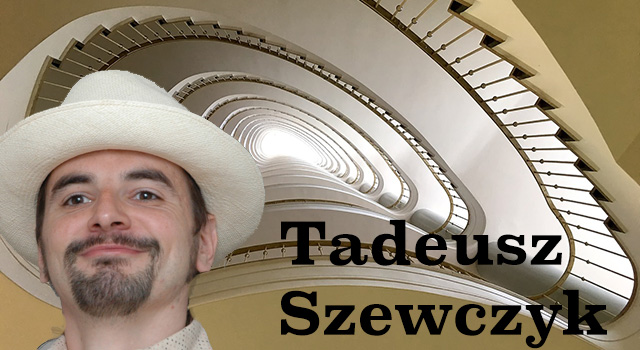 This is part of the say something nice about an SEO/SEM series - feel free to nominate someone over here.

Tadeusz Szewczyk is in his 40s and lives in Berlin, Germany with his wife and daughter. Some of you may recognize him from his intense hats in his profile photos. Tad, as some refer to him, is very active in sharing on social media. He has published hundreds of pieces of content around SEO over the years and he is super vocal in his ideas and beliefs not just with SEO but other topics as well.

Martijn Oud, the person who nominated Tad, had wonderful things to say about him:

Tad is a wonderful individual. He's been in the SEO game for years and is always read to help and give advice. He is not only passionate about an open and free internet but also a strong advocate for living green, veganism and privacy.

Tadeusz deserves an extra thanks because he is not afraid to give his opinion even if it's controversial. This results in great discussions and new ideas. This makes our entire community better.

Tadeusz Szewczyk Bio: Tadeusz Szewczyk has been online publishing for 20 years. He's been building and optimizing websites since the late nineties. In the recent decade he became known internationally as Tad Chef for his writings and philosophy of "SEO 2.0".

He spearheaded a modern take on blogging, social media and search. Even though he lives and works from Berlin, Germany he shares his knowledge globally on a plethora of publications. He pisses off Google since 2004.

Nobody cares whether you're a dog as long as you make sense and add some value. You do not even have to show up in person. People are very supportive and connect easily.

One piece of advice to the SEOs out there? Do not become too entrenched in the SEO acronym. Branch out into all kinds of directions. Optimize for conversions, social media or users with special needs.

What counts is the outcome - online publishing success and making people happy - including yourself. Pleasing Google is not the goal of search engine optimization.

Favorite things in general? I love healthy vegan food, practicing parkour, reading sci-fi novels and Zen meditation. Did I mention that I enjoy blogging, social media and search? My favorite search engine is DuckDuckGo to cover my connections to gay Muslim anarchists.

What you want to be known for in the SEO space? That's hard to answer. I popularized "social SEO" to some extent. Besides that I stood up to Google - at least symbolically by banning Google search on my blog - in a time when most people were rather opportunistic.

In 2014 I coined the phrase "link is president" to explain the true nature of the Web.

I won the UK search award for "best SEO blog" in 2011 - as a Pole living in Germany with English as a third language and working remotely. Sadly neither the agency I did it for nor the organizers told me or invited me to the ceremony.

This is part of the say something nice about an SEO/SEM series - feel free to nominate someone over here.