When Google Maps Shows Embarrassing Business Photos Over Your Photos

Thank you for uploading logos and photos of employees & products to your listing, HOWEVER, we found an image from a blog post on your website that we feel is a better representation of your business. - Google #MachineLearning #ai #algos #buzzwords http://pic.twitter.com/pXwKzA6k0O
— Tom Waddington (@tomwaddington8) December 22, 2017

Yes, and it still shows today for the brand name on Google - [the comfort authority]. 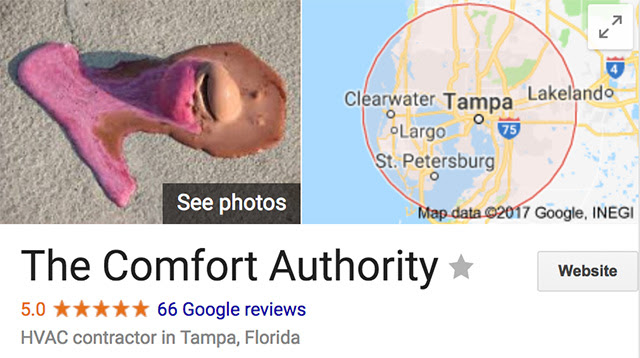 What the heck is that anyway?
In any event, this is a reality for many businesses. Why not let the business owner select which photos they want featured in their Google local panel or Google Maps listing?
For years, the primary photo for my business on Google Maps was of me wearing Google Glass. I uploaded many other photos to promote and better represent the company, as opposed to me wearing Google Glass but it wasn't until maybe a few months ago, after years of showing my face, that Google for some reason decided to show a different photo. That photo is still there, it is just number two, instead number one.
Darren Shaw also shared this tweet:

This is such a common frustration, @GoogleMyBiz. You really should let business owners control the photos on their listings. https://t.co/S3swtbYcde
— Darren Shaw (@DarrenShaw_) December 22, 2017

Why can't Google make it easier for business owners to control these photos? I don't understand it to be honest.
Forum discussion at Twitter.