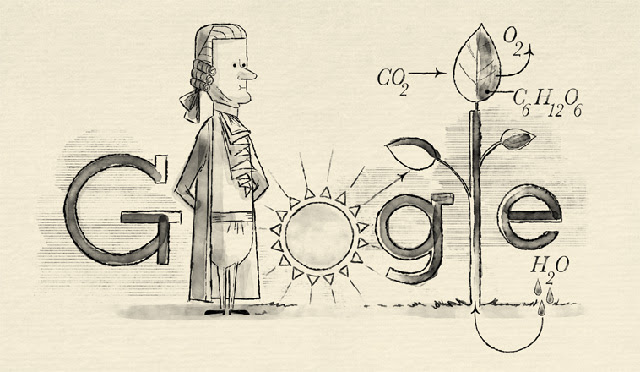 Today on Google's home page is a logo, a Doodle showing off the sun and plants and of course photosynthesis, which Jan Ingenhousz, illustrated in the Doodle, discovered back in 1778. Google made the Doodle to "celebrate the lasting contributions of this scientist to our understanding of the natural world."
Jan Ingenhousz was born on December 8, 1730 in Breda, Netherlands and passed at the age of 68 on September 7, 1799 in Calne, United Kingdom. In 1775 he married Agatha Maria Jacquin and lived in Vienna.


Wikipedia explained that in 1779, Ingenhousz discovered that, in the presence of light, plants give off bubbles from their green parts while, in the shade, the bubbles eventually stop. He identified the gas as oxygen. He also discovered that, in the dark, plants give off carbon dioxide. He realized as well that the amount of oxygen given off in the light is more than the amount of carbon dioxide given off in the dark. This demonstrated that some of the mass of plants comes from the air, and not only the water and nutrients in the soil.
For more about this Doodle and this man, see the Google Doodle page.
Forum discussion at Google+.
PC:SEOROUNDTABLE.COM